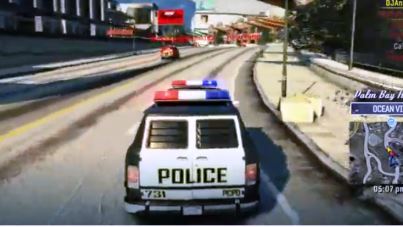 The world of video games are much more advanced and developed. We all love to play video games. Especially, teenagers and college students are very much fascinated with these types of games. There are so many types of games available online. But racing games are very much popular among these. In the racing game, you can find the competitiveness and urge to win over other competitors. Burnout Paradise is a racing game created and developed by Criterion Games. In the year 2009, Criterion Games has a big plan for the game Burnout Paradise. Later in the year 2009, Cops and Robbers was introduced under this batch.

Burnout Paradise Cops and Robbers is a Freeburn game. This game is played in between two teams consisted of four players. Each player will get the chance to progress in their own space and level. This is not rigid and monotonous gameplay like other kinds of racing games. This game is a special reinvention of the burnout series. This is truly next-generation gameplay. After so many variations and innovations, they released the Remastered in the year 2018.

In the earlier versions of this game, the Crash mode is dedicated to cause the biggest crash. Now the Crash mode is called Showtime. This mode can be initiated at any level, any time and place of the game. In the Showtime, you can bounce the vehicle in order to gain points. At the time of the race, the players can take any route in order to reach the destination.

You can also customize the features of the game. You can customize the race settings such as traffic, route of the race and car boosting types as well. In this race, the cars now have the model number and manufacturer as well. The design and model of the car are based on the real-world models.

Before starting the game:

The modes of Cops and Robbers are very much simple and user-friendly. In this game, one team consists of cops and other consists of robbers. Each and every team has to find out and retrieve the gold from various locations of Paradise City. After collecting gold, they all have to come back to their home base as well.

As we can see that cops and robbers have the same aim in this game. Both of the team has to compete with each other in CTF style race. Just before the game, the players can change the team by using the easy drive menu. The host of the game can change some aspects of the game as well. These are such as follows:

In this game, there are two separate teams named Cops and Robbers.

Cops: In this game, the Cops can only use the police vehicles. All vehicles of Cops have PCPD style and finishing. These vehicles have alternative finishes or else it can be repainted.

Robbers: They can start the race with the red painted cars. All the players can select their preferable cars before the starting of the game.

The facility of the multiplayer:

In this online game, there is a game lobby. As a player, you can invite other players from your friend list. After joining the friends, the host can choose the event of the play. The camera feature of Mugshots is available in the PC with the help of a webcam.

The window version of this game:

This is the first-ever game from the Burnout series that was launched for the PC. Criterion has used the advanced graphic technology for this game. They have also enhanced the visual ability of the game. In this game, you will get the multiple monitors in order to enhance the widescreen playing experience.

The Cops and Robbers is the best game of Criterion. It offers premium quality DLC. If you will go for the online in the Burnout paradise game, then you will have to spend $10 and embrace the premium add-on facility. Otherwise, you will find yourself alone in the Freeburn world. This game is designed for the play station 3. In this game, you will get a chance to enjoy and explore the Paradise City. The city is filled with amusement and exciting activities. You can buy the upgraded and better version of Burnout Paradise. You can enjoy the game fully. You will get the best experience with this game. You will definitely get the best fun and experience the amusing activities while playing the game.

The game is filled with action and fun. You will get a chance to explore the city. You can also get so many police variations in this game. In this game, each team tries to grab and collect the gold and take these to their base. At the end of the game, the team will win the game that delivers the most of the gold. So, this game is full of enthusiasm, energy and power. You will get the so many features as this is advanced and developed. This is one of the best games from Criterion. The players are also addicted to this enthusiastic game.