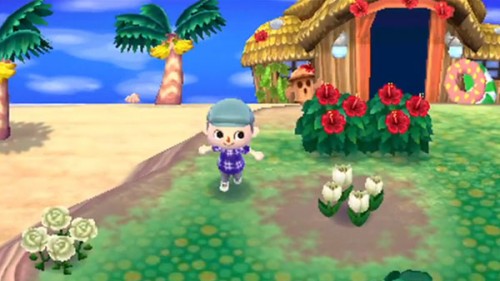 The Twitter search results for #ACNL will tell you more about Animal Crossing New Leaf’s inimitable appeal in 140 (or fewer) characters than I could possibly hope to over the course of a lengthy review. From the ecstatic: “GUYS! I HAVE A DOUBLE RAINBOW IN MY TOWN!” to the poignant: “Sometimes, it feels like you’ll never meet the villager you were meant to be with”, to the appreciative: “Isabelle, for all your hard work, your own bathroom by town hall!”, the response via social media to New Leaf which, in series terms, reaches new heights of personalisation and communication, is richly appropriate.

New Leaf’s biggest change is that now not only are you the new resident in the town of your naming (which in my case is Glowy, following a tradition of naming Animal Crossing towns after imaginary pet rabbits), but you are also the mayor. What this means in practice isn’t a huge difference to the dynamics of play: the loops of routine, discovery and commerce still apply, but your extra powers include the ability to build new public projects (everything from bridges to a bench), while so-called town ordinances affect the way the town runs. Each of these four laws impacting subtly, yet perceptibly on issues such as shop opening hours and the attitudes of your fellow dwellers. This is all managed from your very own town hall, where the aforementioned Isabelle (your assistant, who is a puppy), will keep you abreast of approval ratings and other areas of mayoral importance.

Thankfully this shift doesn’t alter the core of Animal Crossing. There is still a simple joy in conducting your daily routines, and before long New Leaf settles into a familiarity that series veterans will fondly recall, while the basics are extremely easy for newcomers to pick up. For all its surface pleasantries (fossil collecting, fishing, eccentric conversations) however it’s money – as in the boring real world – that is key in the land of New Leaf.

Bells, the currency of choice, not only act as the means for your own personal consumerism but are also essential to the mayoral decisions discussed earlier. That new centrepiece fountain isn’t going to build itself of course, and this treatment of commerce is arguably the most fascinating aspect of the Animal Crossing games. Both gently education and reflection of player psychology, your pursuit and expenditure of bells will likely say more about you as a person than you may realise. For example, focus on earning bells to pay off your ever-increasing mortgage and you may think that the town is starting to feel neglected as a result, while there’s also nothing wrong with taking your time and avoiding a feverish clamour to accumulating wealth. New Leaf, then, is ideologically flexible, and apolitical utopia in which perhaps the most puzzling aspect is the perverse economics at play (e.g three oranges can earn you enough to buy one, albeit basic, bed).

New Leaf also continues to prove that, however similar and welcoming the mechanics may be in the home console versions, it’s the portable editions of Animal Crossing that really make sense for tending to your town and its real-time fluctuations. The 3DS isn’t wasted in this regard, with its integrated social features really helping expand the scope of the experience on offer. From a basic level, such as StressPass collecting the data from passersby so you can then visit their homes, or play coins being used to purchase rare Nintendo-themed items in game, to a more advanced implementation of online play, where up to 4 players can visit each other’s towns, Animal Crossing has never felt more open to sharing. As the reactions on Twitter suggest (not to mention the fact that 25 of the 33 Miis I have encountered since launch day has been playing this), New Leaf has appeared to capture the imagination of gamers more than any previous entry in the series.

It’s not a complete overhaul of the series, but it’s an entry that intelligently pushes Animal Crossing into new areas of control and creativity. New Leaf has already passed into that rarefied place whereby play isn’t just a matter of getting from A to B before moving onto the next challenge; it’s a compulsion, a daily routine as normal as brushing my teeth or feeding my rabbit (if I actually owned one). It’s only right that we should return to Twitter for the final word: “Made it just in time to unload my turnips for 436 bells each right before noon. Good thing I was cautious yesterday!”