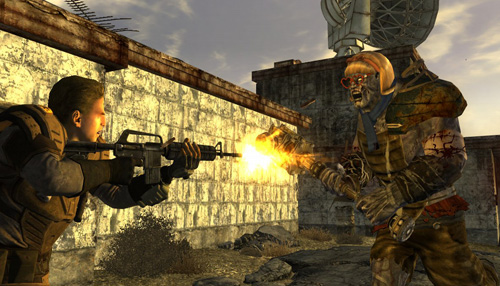 Although New Vegas is not a direct sequel to Fallout 3, it comes a mere two years after Bethesda Game Studios’ stunning take on nuclear aftermath and post-apocalyptic wastelands amongst the ruins of Washington DC. Moving studios to Obsidian, who have had their fair share of criticism over the years, Fallout: New Vegas was a masterpiece waiting to happen. Using the same engine that its precursor ran on and moving the setting to the lesser-hit Mojave Desert and ‘New Vegas’, Fallout: NV is a little off-kilter with what we were expecting. It’s more of the same, for sure, but what does that really mean?

The initial announcement from Bethesda that the next full title from the Fallout universe was to extend its reach from the Capital Wasteland to the dry, dusty plains of the Mojave Desert had us tempted to envision a game where the bleak and desolate greys and browns became translucent with the neon-lit Strip, lights and electronics that such a setting that had not been directly struck by the nuclear attack could have provided. The truth is, the ‘Mojave Wasteland’ (roughly the same size as the ‘Capital Wasteland’ in Fallout 3) is as miserably depressing and sombre as that which was afforded two years ago. Even the promise of the bright lights of the New Vegas Strip and its distinctly styled casinos (the ‘Lucky 38’s’ glorified tower rising high above anything else in the game and owned by the mysterious â€œMr. Houseâ€, to the more Sin City-styled ‘The Tops’ with Sinatra ringing through casino floors) is a missed opportunity. The Strip is empty, morose and unwelcoming, with no signs of a burgeoning of life or positive projection of vastly improved resources.

Otherwise, everything you’d expect from the new Fallout FPS-RPG template is in place in terms of creatively ambitious and diverse locations, deranged characters and strange cults/factions, from the sprouting of green vegetation through the seams of Vault 22 to the law-upholding NCR (New California Republic â€“ formed from the survivors of Vault 15) and the Greaser’s of The King’s School Of Impersonation who have a seemingly unlimited supply of hair gel and leather jackets. 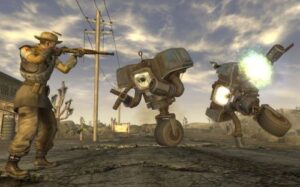 A number of additions to improve upon the formula that Fallout 3 had laid out really do give us the impression that Obsidian had enough of their own ideas to make this a game that expands upon 2008’s entry, without a complaint that it should be a DLC expansion piece. The way in which factions are directly entwined into the game is a welcome spin on the morality meter. With positive and negative karma still incurred for stealing/helping folks, New Vegas’s many factions and towns each have their own impression of you, from being vilified by Caesar’s Legion (a large Slaver operation) to being jovially respected by the town of Goodsprings, that RPG promise that choices and actions will directly impact the latter stages of the game are none more appropriate than here. It’ll be the key differentiator between walking straight through a slave camp with the intentions of receiving the Platinum Chip and having to level up to insane heights to fight off the Legion in the same instance. Your relationships are also likely to affect item prices, encroach on NPC conversations, and step onto the opportunity to employ companions that will help you through the game (you can have one human and one non-humanoid companion characters in your party at any one time).

The companion wheel to direct your fellow party members is also a fantastic UI addition that will remove the need to go into dialogue options each time you want to alter your stance. Meanwhile, your AI partner is likely to compliment/criticise your many right or wrongdoings or interject when they feel you are out of line in your morale judgements. However, apart from the key features detailed here and other additions such as the ability to upgrade weapons with mods, Obsidian fail to capitalise on that which they have been given. In fact, if you hadn’t been told any different, New Vegas would appear no different on the surface than Bethesda’s scoped masterpiece. 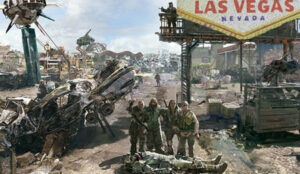 Graphically and technically, Fallout: New Vegas is also bland and poor, respectively. New Vegas’s wasteland is mired with bugs, most still having failed to be patched; clipping issues, severe frame rate drops, texture pop-in, crashes and, unexpectedly, returns to the dashboard without request all hindered our experience at one point or another. And although Obsidian Entertainment have modified the Fallout 3 engine to improve upon lighting effects, the game is years out of date in terms of graphical fidelity and is utterly unappealing to the eye. The scope might be broad and vast but it suffers from that which Fallout 3 could have been criticised for; the poor combat system outside of V.A.T.S, the overwhelming scale of the emptiness of the map and the stilted dialogue animations. On the topic, the improvements upon the dialogue tree are excellent and much more frequent in its usage of skill requirements to progress specific options within the conversation. Later on in the game specifically, these will be of much more use and will make sure you’re more inclined to add as many points to the many number of skills in levelling up as the more popular of, say, ‘Guns’ and ‘Medicine’.

We can’t help but have a problem with how little Obsidian have bettered the experience in Fallout 3. We loved Fallout 3, granted, but New Vegas has too little evolution of note to be really worthy of a higher score at the foot of this page. Obsidian had an admirable chance to re-define the Fallout experience but have really failed to enrapture our passions for the series. More of the same? Yes. But ultimately unlikely to be remembered as fondly as the third in the Fallout cannon.