ArmA II: Operation Arrowhead believes war is tough. I seem to spend most of my time lying down on the floor and hoping the hail of bullets pinging across the air does little more than graze me. Worst case scenario for single-player is they take out another member of my squad. They’re not real, so it’s okay. I really don’t want to die. 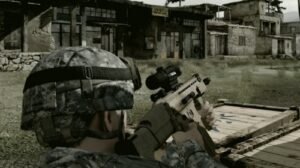 Operation Arrowhead, a standalone expansion, also seems to be under the impression war shouldn’t last very long. The perfect war shouldn’t take much longer than a comfortable weekend of play, it seems, and that’s with frequent breaks for telly and a whole trip to the pub on Saturday night. There’s a scant six missions in the main campaign, although the package is beefed up a bit with the usual collection of scenarios and multiplayer.

It’s undeniably daunting at the start, especially if you’ve (like me) got into Modern Warfare or Bad Company in recent months. Bullets really hurt in ArmA II, and there’s no certainly no scope for any of the kind of gung-ho bravado or glistening biceps that make up most contemporary shooters. You will instead spend a lot of the time with your bum in the air, slinking your way across barren rock and occasionally sprinting from shrubbery to piles of bricks.

Enemy encounters rarely involve shooting them at a distance where you can see the whites of their eyes, although you can still run up to them after they’re dead and dance on top of their corpses. Opposing forces are usually just distant blips on the horizon, so you shoot at pea-sized opposition across the gulfs, valleys and buildings of fictional Takistan.

That might be an altogether more realistic fashion to wage wars, but it does make you eerily detached from the proceedings. Soldiers might prefer it that way, but gamers usually expect something a little more emotionally complex from their targets. I am definitely more acquainted with the Pig Cops from Duke Nukem, for instance.
The wannabe-realistic war simulator takes us to the entirely fictional land of Takistan, pitting you against the oppressive forces of Colonel Aziz who, presumably, took to becoming a videogame baddie after his career as a Saddam Hussein lookalike stopped being financially viable. Despite shamelessly fashioning the story and environments around certain obvious events in the real world, there’s very little going on to engage players with the story.

Despite having never held a gun, I get the distinct impression Bohemia can accurately capture the heft, weight and feel of an assault rifle. Give them a narrative arc, however, and they fall to pieces – the droll AI members of elite military coalition Task Force Knight have less combined personality than a single generic townsperson from Final Fantasy.

It’s because Bohemia’s talent is simulating, not creating – their extensive roster of military equipment is bolstered by the addition of thermal imaging, backpacks and UAV’s, amongst others. If you’ve been partial to taking ArmA II online then the new bits of kit offer up surprising amounts of tactical depth and entirely new ways to approach dangerous situations.

Answering the key question of any good expansion pack – should you buy it? – is a tricky one. Operation Arrowhead is standalone, sure, but I think it’s definitely preaching to ArmA II converted instead of trying to attract new fans. And while there is plenty of content for the veterans, there’s very few ways to actually get a good play with the new equipment out of the box. Fans of the mission editor will be set for a good few years, and the modding community will go absolutely gaga, but it’s a bit too much like slim pickings for the rest of us.

Operation Arrowhead still features the elements that ArmA II did so spectacularly to begin with, though, such as capturing a sense of weight and heft with even basic movements. It gives you new ways to play in its literal sandbox, new tools to muck around with and some brilliantly designed set-piece scenarios: “Laser Show” has more laser pointers than a trendy disco and creates a night-time gun battle that is beautiful, dangerous and gripping.

You’ll be unhappy if you were hoping to see bugfixes and optimisations, however. Takistan is still home to an erratic framerate, temperamental engine and the kind of sloppy AI that remains completely oblivious until you start firing. If these troops are the best Takistan can bring to the battlefield, well, it’s no wonder you can plough through Operation Arrowhead so easily.