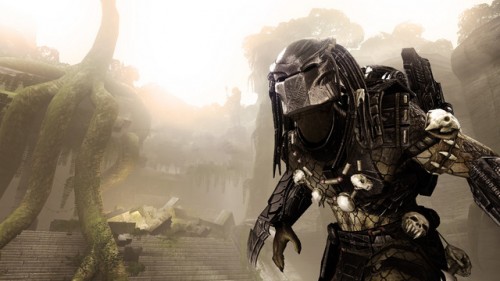 This year’s reboot of the popular AVP series is one we have been following for some time. After all, when three campaigns are promised it’s likely to pique your interest, particularly when the FPS genre has been saturated with cookie cutter clones. Thankfully Rebellion – the development team behind the original games as well as this latest iteration – has succeeded in making each species play distinctively, in turn awarding gamers a unique experience with each campaign. The game has an online component that strives to set itself apart from the competition via these diverging play styles but will it be enough to bring the franchise snarling into the modern era and appease the fans left disillusioned over the lacklustre films?

The game begins with a familiar face – played by none other than series regular, Lance Henriksen – opening the door to a Predator temple, in turn provoking the ire of those who consider it holy. What follows is a tale of survival, experimentation and desperation that never strays too far from the formula seen in the films. The plot and its characters are as undeveloped as you might expect but the story redeems itself by allowing you to view it from the three different perspectives, which competently intertwine without ever converging directly. The world is expanded through the many audio diaries scattered about the stages but the inability to listen to them on the fly is unfortunate, particularly if you’ve recently played through Bioshock 2. It’s unlikely to matter much though, as this game is all about shooting, gutting and beheading your way through the levels then taking the battle online.

The first of the campaigns is that of the Marine. Armed with a pistol, a Pulse Rifle complete with secondary grenade fire, a Smart Gun with the handy ability to detect Aliens (Xenomorphs) and a powerful shotgun to name a few, your job is to traverse the abandoned corridors and jungles to unravel a conspiracy involving the Weyland-Yutani corporation. Any issues we had with handling from our preview were mostly dispelled, though the complete omission of iron sights is questionable at best as is the ever-changing load out between levels. The opening levels are thrilling and make you feel a part of the Aliens mythology due to proficient development of suspense and atmosphere. After these first few hours you’ll have hit switches, moved power supplies to open new routes and hacked terminals while fending off the horde for a set amount of time. The problem is these activities repeat themselves many times throughout the single player story, making the campaign feel stale far sooner than it should. 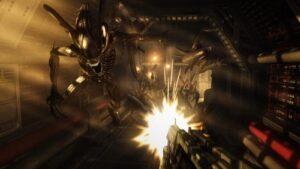 Playing as the Predator is a much more stealth-based affair. It’s all about stalking your prey with the weapons at your disposal, moving silently in for the kill then disappearing before the rest of the group detect you. You can distract Marines by throwing your voice, fire your shoulder-mounted Plasma Caster and tear into them with your intimidating wrist-blades. These blades prove especially useful when stealth is no longer an option, such as the moments when faced with a group of Aliens. New areas can be traversed through the Predator’s superior leaping skills and this coupled with the indispensable cloaking device will give you the environmental upper hand, thus giving you time to consider your next move. Above all, the style of play presented demands a much more methodical approach where those patient enough will learn to use the landscape to devastating effect. Fans will be pleased to know that the spine-ripping trophy kill from the movies is in, even though the finishers appear to be randomised or dependant on the angle of your approach.

The third campaign – though chronologically the first – is that of the Alien. Beginning life as a captive, this bloodthirsty warrior known only as Specimen 6 has the single task of obeying the commands of the Queen. The story here is very short and can be beaten quite comfortably in an evening of gaming. The biggest issue with this mode is one of control; the Xeno is incredibly nimble, so the frequent moments of wall to ceiling action may well leave you disoriented and more than a little frustrated as you wrestle with the sticks and trigger buttons. Lacking a ranged weapon of any type, close-quarters kills are the only method with which to butcher the Marines that impede you, so learning to use the darkness to your advantage by killing the lights, destroying power terminals and biding your time in vents becomes a necessity, especially if you wish to pull off a grisly finishing move. These are every bit as gruesome as those of the Predator and often involve slitting a throat, removing a head or gouging an eyeball to refill your own energy bar. The stealth of this campaign lacks the finesse of the Predator but it still presents some satisfying moments due to a sense of empowerment and agility. 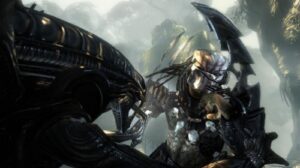 AVP supports a diverse range of multiplayer modes for up to 18 players. Standard Deathmatch is the usual free-for-all while Domination stands in as Rebellion’s take on Capture the Flag. Other modes are tailored more towards the AVP experience such as Species Deathmatch, which pits a team of each class against the other in a feverish attempt to reach the target score. Infestation is one of the most chaotic modes and generates a real sense of panic as a randomly chosen Alien takes down your teammates, who subsequently respawn as a member of that species. The reservations we had regarding Predator Hunt have also been swept aside, as the beeping of the radar and sense of impending doom will likely get your adrenaline pumping and your fingers twitching. Mixed Species Deathmatch allows teams of the various classes to do battle, though this can end up more confusing than thrilling. The major problem suppressing each of these modes is the lack of stages overall and while we expect the game to be supported post release with a number of downloadable map packs, the lack of arenas out of the box does pose an issue of longevity. Survivor allows up to four Marines to take part in a last stand, facing waves of increasingly ferocious enemies in an arena. It’s a nice addition, particularly given the sense of camaraderie it offers, though it’s fair to say that this mode has been done more expertly in previous titles.

The world has been crafted with some consideration for each species; tight corridors for the Marine, large open areas for the Predator and small vents for the Alien punctuated with dark ceilings to facilitate the murdering. The lighting effects are top notch and add much to the environment, even though the graphics as a whole fail to take advantage of the tech available. Describing the game as scary is a bit of a stretch but the levels have been designed with enough flair that a sense of foreboding continues to affect you even towards the final acts. A few more environments online would have been beneficial but with three, albeit fairly short single-player campaigns, it would seem unfair to be too critical. The three classes are surprisingly well balanced given the diversity of powers, yet AVP still fails to reach the dizzying heights of other games released these past few months. The series has been off the radar long enough to appear fresh and this is exactly how it feels, making it easy to recommend to anyone after a solid game based on the AVP franchise.