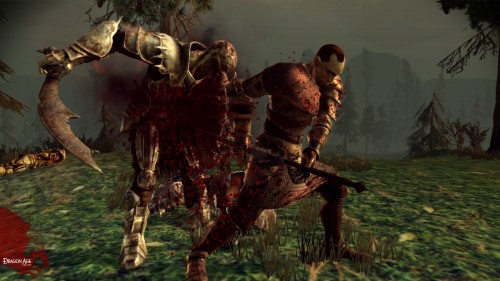 Everybody loves a good beginning. Dragon Age: Origins revels in it – it’s suffixed Origins, for a start. But that’s a bit of a misnomer, as much of the game’s hype and anticipation comes from its claim of being a spiritual successor to the venerated Baldur’s Gate series – which saw its last release almost a decade ago. That’s a long time, and the game sets itself the tall order of having to satiate those nostalgia-addled fans whilst sucking in new ones, in a new property which is going on sale during the exact period of the year where new franchises seem to be at their least popular. You’d think EA might have learnt a lesson after last Christmas.

Though Dragon Age might be a new IP from Bioware, it’s certainly not a new game. Its fantasy narrative is punctuated with their ubiquitous mix of strategic top-down battles (on the PC version, at least), multiple dialog options and abundances of side quests. It often smacks completely of their works of old, but the fans of those classic properties – of which I am a card-carrying member – will see this as a blessing, not a curse.

The land of Ferelden is a blank slate for the development team, and although elves, orcs, dwarves and castles hardly stand out as original, Bioware add glimmers of individuality in their use of rampant violence and ceaseless bureaucracy. It’s a bloody, messy universe consisting almost entirely of death and the morally grey, where bad things happen to innocent people and there’s no possible way to save everyone. If Baldur’s Gate was Bioware’s RPG mould in its formative years, Dragon Age shows it in a mature phase: death and deception are rife, with a fair chunk of the former dribbling out from whatever target you’ve just rent apart with a sword. The game’s aesthetic is inextricably fused with the sight of haemoglobin, with dollops of it punctuating your travels across the world map and its splatter often coating your party in a gory crimson mist. 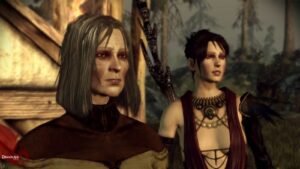 How you start your spiralling, countless-hour journey is ordained by the race and background you’ve selected. There are six in total, with two for each playable race – Human, Elf and Dwarf, and each painting a very different portrait of the world. An elf, for instance, can start out as a member of a proud forest-dwelling clan, living away from everyone else, or occupied in walled-off city ghettos under the constant oppression of their human masters. These stories, complete with their fair share of rolling cinematic shots and forced exposition, colour your view of the world from the offset, fusing your own in-game sentiments with that of your chosen race.

The multiple paths converge after a while, and your characters get recruited into the Grey Wardens, a long-standing multi-racial faction who exist for the sole purpose of fighting a never-ending battle against the Darkspawn (read: orc) scourge. This, traditionally, would be your cast of heroes – the White Knights, if you will – but Dragon Age would never be content with such a simplistic view. Grey Wardens are fanatical to the extreme, and their dedication to the cause is of far more importance than anything else in the world. Even the traditional heroes lack heroism. 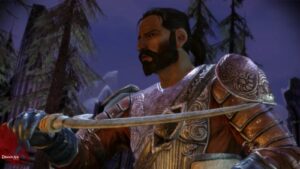 Dragon Age’s greatest asset is its universe. It’s well realised, deftly managed and its confident delivery ensures the game is intriguing for the fifty-plus hours of gameplay contained underneath its murky lore. Your companions provide much of the detail, bickering and questioning each other behind you as you navigate through dungeons and towns. Chief amongst your party are the witch Morrigan and your fellow Grey Warden Alastair – the two of them argue so much you’d be forgiven for assuming some kind of deep sexual tension between the pair. The duo dance around as the closest thing in the game to a moral compass, providing commentary on your various choices but also proving that there are no real deep-seeded backlashes to your choices: Morrigan fell head-over-heels in love with me, despite resenting my silly do-gooder ways, after I gave her a few shiny baubles. And, yes, there are awkward sex scenes.

The characters exude life and soul despite the game’s clunky animations and less than stellar voice acting – that’s the power of Bioware’s effective writing. The same, unfortunately, cannot be said for the environments: all the rote forests, castles and dungeons tend to blur into a single indistinguishable mess. It’s also too bloody hard in places, with a wonky difficulty curve comparable to a diagonal line drawn by a Parkinson’s sufferer sitting on a moving bus. Though that’s not nearly enough to undo the game’s stellar tapestry: Dragon Age throws a player into an epic trek of good, evil, politics, levelling up and great big bloody swords, creeping into your psyche and consuming countless hours. Repetition and a lack of imagination tar the landscape, but lately the first thing I’ve tho