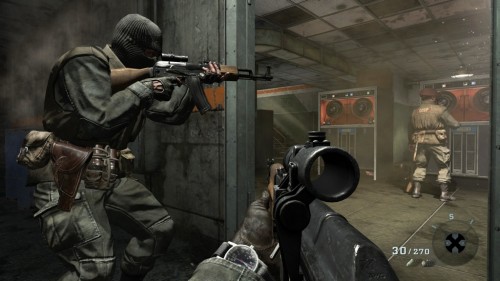 The sheer weight of expectation and blanket media coverage that comes with such a major release makes it difficult to approach Call of Duty: Black Ops with an entirely open mind. Matters have been further exasperated this time around with the now infamous departure of Jason West and Vince Zampella from series creators Infinity Ward; an event that has swung even more critical attention onto Black Ops developer Treyarch. For Black Ops to live up to the hype is a big ask, but with the sound of cash registers ringing and the dust settling on a thousand by-lines, Treyarchâ€™s latest effort is now in the public domain and we get to see if it is worthy of the attention and the Call of Duty name.

As has become the tradition for the Call of Duty series, Black Ops is neatly split down with the middle, with single player campaign and multiplayer portions residing on separate menus. While it is undoubtedly the latter that will prove to be the biggest pull for many gamers, the single player campaign plays a significant role in the overall package, and itâ€™s clear that Treyarch have spent a lot of effort (and money!) in crafting a memorable experience.

The last Call of Duty â€“ Infinity Wardâ€™s Modern Warfare 2 â€“ was full of bold concepts and more than a little controversy (two words: â€˜No Russianâ€™), but failed to hang together in a satisfying manner; individual scenes may well have been beautifully paced and orchestrated, but the whole bordered on incoherency. While Black Ops is unlikely to win any awards for storytelling, in this area it does mark a considerable improvement on its predecessor, using some ambitious narrative tricks and featuring a number of scenes that showcase a surprisingly degree of subtlety and, dare we say, humanity.

And yet, â€˜subtletyâ€™ is possibly the last word that springs to mind when attempting to describe the majority of the campaignâ€™s run time â€“ Black Ops is as close to a literal rollercoaster ride as you can get without having to meet a minimum height restriction. From the outset (by which we mean the opening menu screen) Treyarch literally strap lead character Alex Mason into his seat and force him to relive a series of key events (mainly set in the 1960s), taking you along for the ride. The central conceit of reliving past events does much to paper over the location/timeframe-jumping cracks that marred Modern Warfare 2, enabling Black Ops to visit a swathe of locations and time periods without the plotâ€™s overall cohesion falling apart. 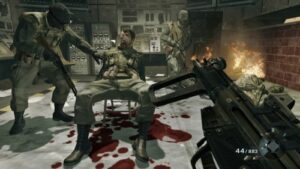 Stylistically, Black Opsâ€™ solo campaign appears to draw from a number of inspirations, with nods towards the obvious (24, Apocalypse Now, Platoon) and the not-so-obvious (the central interrogation scene brings the bleak body horror of the Saw movies to mind, and the chronological jumps and character switches have a distinct taste of Quantum Leap to them). Though itâ€™s a slightly schizophrenic approach, it is one that ably mirrors the turmoil of both the events covered and of Masonâ€™s psyche.

The diversity of storytelling method is matched by an impressive range of locations and aesthetics, with no two levels looking the same and each managing to convince. Whether youâ€™re creeping though the jungles of Vietnam, escaping the confines of a Russian labour camp or hopping across the rooftops of Hong Kong, Treyarch consistently do an astounding job of capturing the setting while demonstrating new-found visuals flair. The Hong Kong mission is a particular highlight, with the storm-swept neon cityscape being one of the most visually impressive locales weâ€™ve visited in some time.

Unfortunately, this diversity is not reflected by the gameplay, with the rollercoaster analogy being further cemented by the linearity of the whole experience. While there are sweeping highs and plenty of twists and turns, the core gameplay ploughs ever onwards down a fairly narrow path. Though there is often a reasonably amount of breadth to the level design (numerous routes to reach the same objective), you are for the most part funnelled down chaotic corridors of action. 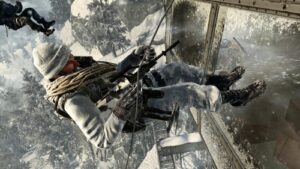 Obviously there is nothing inherently wrong with linear gameplay, but unfortunately the combat itself is lacking in variety, with the majority of levels simply throwing hordes of troops at you and challenging you to stay alive. This does make the action extremely fast paced and explosive but what starts out as being impressive over time it can become a bit tiring. There are numerous quieter moments strewn throughout the game, but more often than not these offer limited interactivity, mainly serving as narrative gateways to the next slice of carnage.

The most disappointing aspect of the single player is that Treyarchâ€™s attempts to embellish the traditional Call of Duty format largely disappoint. Piloting an attack chopper, for example, sounds tantalising on paper, but in reality it shares as much in common with the throwaway arcade thrills of light-gun shooters such as Time Crisis than it does with the tactical gunplay on which the series is founded. Sections such as this make for a fun enough distraction, but offer little incentive for you to revisit them due to the limited amount of control you are given.